Save Your Bucks readers. You are about to build one of the most compelling and thought-provoking articles ever written regarding the question. Should I be investing in precious metals, and should I be buying Gold or Silver?

Even though this information was first published in 2008, we believe it is more thought-provoking in today’s Digital economy than ever before, as always we would love to get your perspective on Mr. Kiyosaki’s insights.

Gold & Silver is God’s money. It’s money made by God. And then in 1971 the US government under tricky dick Nick, President Nixon took God’s money and turned it into man-made money.

Never in the history of the world has this ever happened. In 1971, the US and Nixon convinced the entire world to replace gold and silver with paper money. This paper cash is trash. So the reason we had so much volatility in the world today is history since the time of the Romans and the Greeks and the French and the English and the Germans, every time they have taken God’s money like Gold & Silver and replaced it with man-made money, there has been economic volatility. 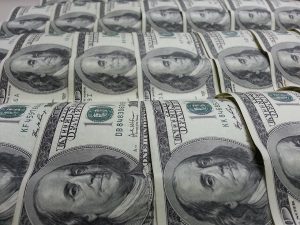 The reason this current election doesn’t make any difference is the only person that can put this back in place is a strong charismatic leader. It is going to take someone like Julius Caesar or Napoleon. That’s why they were such great leaders as they replaced paper with gold.

They will continue to print more than ever before, which means the dollar keeps coming down. Other things keep going up, and that’s really what’s going to happen. It’s predictable and eventually, this paper will go to its true worth which is zero.

So, all of you, savers out there and people trying to save this trash, you’re going to lose big time. To me, I’ve been saying this for several years now. Silver is the biggest opportunity I have ever seen. Bigger than real estate, bigger than anything else and silver, as we’re talking today, 2008 is about $15 an ounce. (SaveYourBucks.com readers, when you realize Mr. Kiyosaki wrote this article in 2008 doesn’t that even create more provoked thought?).

There’s less than 10 years’ supply worth of silver on planet earth. The difference between gold and silver is gold is hoarded, silver is consumed, silver is an industrial precious metal. It is used in cell phones, telephones, computers, electric lights everywhere. The more the information progresses and we move forward as a digital society, the more we use silver.

That stockpile is at all-time lows and they’re not discovering much more. Holland has about 25% of the world’s silver. So, buy real estate sold in Poland, you know. But anyway, when people ask me where am I investing? I say I’m investing in the world.

They say, what do you mean by that? So I’m investing in a metal that is consumed throughout the world. So when they ask if I buy a little gold, I have not, I’ve been buying silver!

Kim and I’ve been buying silver since it was about $4 an ounce and we stockpile, we buy ETFs, we buy anything we can.

Then all of a sudden, now it’s 15 and we’re just watching it. It is not a crystal ball; you know? And it’s not about the stuff on television.

So I look at it as $15 an ounce, so, oh, that’s, I don’t think I’ll wait. Well, I remember when It was three and three fifty and then three seventy-five and then four dollars and then I said, yeah, the bottom had been hit. The thing is trending up and it just keeps going.

Save Your Buck members. We are re-plushing this article today.
August 25th, 2019. Below is a graph of the ten-year track record of silver.

We believe that diversification of your portfolio to precious metals makes great historical, common sense.

We have been buying Mint, Silver American Eagle coins on Amazon for several years.  We place an Amazon order, we buy a coin. It has become a habit that I feel makes good long-term financial sense. SILVER AMERICAN COINS ON AMAZON.

Over the past fifteen-plus years, Robert Kiyosaki has become the most recognized and influential financial education teacher in the world. We believe it would be a good decision for all Save Your Bucks readers to ignore the wannabes and become very familiar with Mr. Kiyosaki’s work.

Here is a great place to start: OTHER ARTICLES WE HOPE YOU FIND THOUGHT PROVOKING

Why NOW is the time to invest in Sports Cards

The 4 Most Important Rules of Investing in the Stock Market …… PERIOD!

What are your thoughts on investing in gold, silver, and precious metals?